In previous posts, I’ve advanced the idea that a name can be so bad that it’s good. Deliberately or by accident, a name comes out that provokes the reaction: “Well, if they’re using that name and they’re still in business, the product must be terrific.”

Classic examples are family names that maybe didn’t sound weird or offensive in the Old Country, but over here…probably best known is Hellman’s Mayonnaise. (“From the folks who bring you Satan’s Ketchup and Beelzebub Relish!”) Now, no one asks to be named “Hellman”, but once it’s there…

A regional example I’ve also mentioned is the central Pennsylvania dairy, Harshbarger’s (which appears, alas, to have gone out of business some decades ago). (The slogan: “Bringing lactose intolerance to the masses!” The radio spot: “When you feel the need for something to barge harshly through your lower tract…”) 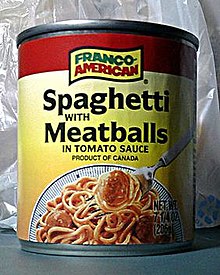 Eventually, these names get absorbed into the general culture, and no one thinks that putting Hellman’s on a sandwich makes you a devil worshipper any more than driving a Chevrolet is a statement about your views on Franco-American relations. (Although you can still find conspiracy theorists who claim that Franco-American Spaghetti was the real reason Charles De Gaulle pulled his country out of NATO.)

And, most recently in the post “’NomenEst Omen?’ Uh, Not Always…” ( ) I wrote about the Takvorian family, who, for reasons that still elude me, sell their excellent Middle Eastern food items (dolmas, tabbouleh salad) under the brand name “Haig’s”.

It occurred to me that there is really nothing inherently wrong with using either the Haig or Takvorian family name as a brand name…except for the ludicrous ethnic mismatch. Is this a whole sub-category of the brand name that’s so bad it’s good?

When I worked at Dataquest, the nearest restaurant (alas, now apparently closed) was called “Carlos Goldstein’s”. IMHO, it was a good Mexican restaurant that paid tribute to both halves of its name with some really terrible ideas. (Their pastrami burrito alone set the fusion food movement back a good ten years.)

And more recently, I came upon an item in a Grocery Outlet  weekly ad for…Ji Hao buttermilk biscuits. On investigation, this turns out to be even stranger than it sounds at first. Ji Hao happens to be a brand line of Asian Foods which is in turn part of Sysco, the outfit known mostly for providing food and restaurant supplies to restaurants, hotels, nursing homes, etc.

Meanwhile, back at the buttermilk ranch…most of the line of Ji Hao products seem to match up reasonably well with the name: rice, cooking oil, imported canned fruits and vegetables…and then there’s Ji Hao cream cheese. To go on your jalapeño bagel at Carlos Goldstein’s?

PS  “Sysco” seems to me to be also a sort of mismatch; the name has nothing to do with food or restaurants, and looks and sounds like someone was aiming for the most generic tech company name available, and was disappointed that “Unisys” had already been taken.