“I Think, Therefore I Yam…”

“…what I yam.” (A.k.a. “The Descartes-Fleischer Hypothesis of Reflexive Consciousness”)

Let’s start this post with a Brighter Naming PSA: give blood! Both Athol and I are blood donors, and occasionally run into each other when the bloodmobile shows up.

In addition to just doing a good deed, there are other benefits to donating blood. Depending on time and location, you may get various discount coupons, or T-shirts…but one benefit you always get is a “mini-physical”. To determine whether or not you’re in good enough health to donate, the medical staff runs a quick check on four vital signs. If you’re OK on all four, then you donate. If not…depending on what test you failed, and how badly, you can take appropriate action, ranging from “going home and getting some rest” to “sitting quietly until the ambulance arrives”. 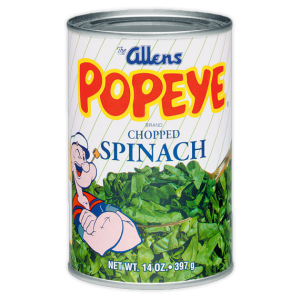 The one time I was prevented from giving blood was because I was just barely below (12.9 where the cutoff was 13) on the test for iron in my blood. Now, a slight iron deficiency is easily correctable by a few tweaks in diet, so I made sure I passed on my next visit…by the simple expedient of heating up a can of spinach for my side dish for dinner on the evening prior.

Eventually, this gets around to naming. As I was enjoying my can of Popeye brand spinach I got to wondering: how many products are there named after cartoon characters?

As I reflected, this question became more complicated. There are (as far as I can tell) not a lot of such products. However, there is a strong flow in the other direction: products that come first, and then become strongly associated with the cartoon character created specifically for promotional purposes.

The ones that first spring to mind are associated with breakfast cereals, because the cartoons in the ads so often appear on Saturday morning cartoon (what else?) shows. In the following, I will refer to a cartoon character created for a product and appearing in some form of (usually animated) advertisement as a “cartoon mascot”.

A further breakdown of this genre can be done along the lines of the spectrum of eponymy. Cap’n Crunch () and Count Chocula are the names of both the cereals and the characters created to promote them. At the other end of the spectrum, we have Kellogg’s Sugar Frosted Flakes, and what may well be the best-known cartoon 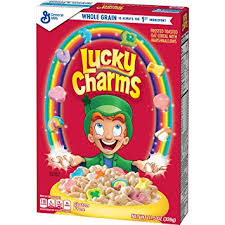 mascot, Tony the Tiger …whose name is altogether different from the product.

Interestingly, there are intermediate cases. In one example (familiar to all our older readers, but likely unknown to younger ones), the product name serves as a family name, while the character also has a given name: Speedy Alka-Seltzer. Other cases aren’t quite like this, with the product name serving as an identifier, but not exactly as a family last name. Examples here are the Michelin Man and the Keebler Elves. And, for those whose appetite for annoying stage Irishmen is insufficiently sated by the Irish Spring soap commercials…we present the Lucky Charms Leprechaun.Of course, those with a classical education will have identified the Trix Rabbit as a modern-day Tantalus. 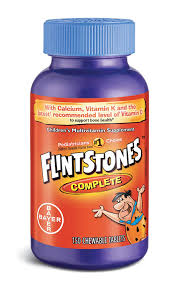 k to the original question: what are the other products named after cartoon characters (rather than the other way around)? We invite readers to add to our list, which is very short. The only two I can come up with are Flintstones Vitamins  and Donald Duck orange juice.

What they have in common is that they are all ingestible…although one is food, one a drink, and the third a supplement. Where they differ is in their relation to the original source material. As an American born in 1950, I’m familiar with all of these cartoon characters in one (and often more) of their original media appearances. (For the record, cartoon characters may appear in one or more of the following: movie theater shorts; full-length movies; television shows; comic books; newspaper comic strips; and animated and print advertising.) Now, there may exist a Popeye cartoon short which doesn’t climax with Popeye regaining near-magical powers by ingesting a can of spinach…but I can’t recall seeing one. By contrast, I can’t think of anything in the Flintstones TV show or Donald Duck animation or comic books that ties the characters to vitamin supplements or orange juice.

For a more rigorous discussion of some of the issues I’ve touched on above, you may want to check out “The Difference between a Name and a Brand”

and “A Name Is Not A Brand.

CAUTION: The names used in this article are all registered trademarks of their respective owners or licensees. Some even have super brand status which gives them across the board trademark protection. Many of these have been licensed. You cannot simply name your product after a famous cartoon character without first licensing it from the characters current owner. But if you come up with some great character for your video game, app, movie or other software product, then maybe you can license it to some big consumer products company to put on their cereal boxes, shirts, hats, games, toys, etc. Remember 3 Angry Birds, one of the first popular games on mobile phones? Though the magic of licensing you can buy toy birds in their likeness, as well as many other products that play on these images and themes. Remember The Rocky movies? The original author made almost no money on the movie rights themselves, but luckily his lawyer persuaded him to retain the character rights. So he gets a cut on every one of those Rocky fighting toys that are still popular today.

There are companies that specialize in helping you license your ideas and designs worldwide, as well as ensuring compliance and protection. See them all at one of the International Licensing Expo Fairs.