Home › Branding › When one letter is sufficient in compound names

When one letter is sufficient in compound names

Take for example the name : Impulsports.

We read at such great speed these days we don’t often notice good spelling or bad spelling. In our minds we do not even notice the phonology – let alone the correct morphology of any or all given words. So does it really matter when Naming Agencies deliberately misspell names?

Absolutely not! This is a very over-crowded market on clear English words and truncation and concatenation has proven to work very well. This is usually seen in big mergers when the two big giants are battering horns and neither want to give up their name.

Yet it works for most companies. Furthermore, it works in Europe where many languages are spoken at any given time in many of its countries – but the name is understood and pronounceable by all romance language speakers and others too do not seem to struggle with it. I hear Russians and Asians using it daily with no issues too.

What a simple context to make a clever name crafted from two obvious words: Impulse+Sports are the morphology of the company’s names – im pulz sport Ss.

Yet, 2 letters are lost when they are merged, both the second S and the middle vowel E –and no-one notices it. Here, is where the phonology of the nouns pairing together works since one still pronounces them as  individuals words – Impulse Sports.

Impulsports –  graphic artists love it! Looks good on the packaging and on the sides of their vans. Here they have on the website even shortened the name to be IMPULS= with 3 hyphens on top of each other to imply the E. The keep fit world is a big industry across the globe. But how many of these gymnasiums have names you can recall or even associate with?  Simplicity seems to be the key here. 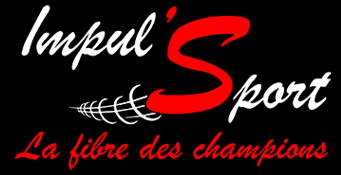 Variation in France incorporates the apostrophe(‘) in their graphic logo. Besides they put apostrophe after the L’ before the S. Furthermore, the name travels! It is international and most countries would be able to say it, write it and above all, have recall!