How do these things start and progress? This post began by sharing a link to an article on the health benefits of canned seafood, which led to the observation that you can no longer order sardines on your pizza. The same is true of the once-ubiquitous anchovy topping and the best work-around for both would be a take-and-bake, using your own additional ingredients.

Pizza with sardines brought back a childhood memory, of growing up in a household where meatless Friday’s were the norm…often resulting in a sardine pizza from Appian Way.

(Discursion: the assumption that the proliferation of pizzerias and frozen pizza would have killed off this brand no later than the 1970s was incorrect. “Appian Way pizza” is Google’s second suggestion after just plain “Appian Way”. Apparently, it’s no longer available, but lasted well into this century; it shows up as sort of “zombie brand” on Amazon and similar; i.e., it at first appears that you can order it, but all the sites now show it as out of stock. For a nostalgic reminiscence about it, check out this piece from blogger The Robots Pajamas.)

From a naming perspective, something seems a bit off about the brand name “Appian Way”, and it’s the same objection for Little Caesar’sand Noble Roman’s: modern Italy descends from ancient Rome, but they are not the same, and one of the big differences: the ancient Romans were a millennium or so away from discovering the delights of a tomato-intensive cuisine.

Well, that got us going on names of pizza in general. Below are some thoughts on both the names and the products of frozen pizzas. (Names of pizzerias are a separate topic, as are the take-and-bake brands sold in supermarkets.For the latter, looks like most supermarkets usually have just one or two brands of take-and-bake, unlike the big selection of frozen varieties.) In the below, opinions about both the names and the products are strictly those of the author, and are entirely subjective; the list is in roughly descending order of price and (again, IMO) quality. 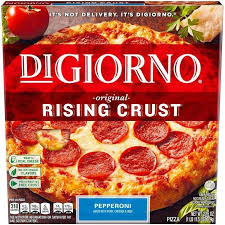 The Name: Clearly Italian, easy to pronounce and remember. Somewhat generic; one online Italian-English dictionary translates it as “by day”, but another has it as “of morning”, a rather odd time for pizza.

The Product: IMO, the best of the frozen pizzas, and the only one that can really stand up in a blind tasting against delivery—as their ad campaigns clearly state. 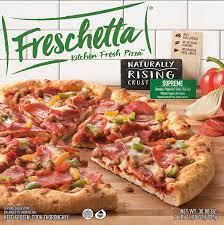 The name: sounds a bit like something made up to sound Italian (cf. “Häagen-Dazs”), and one of the online dictionaries did not recognize it. The other, on the other hand, translated it as “fresh”, so I guess these folks got what they were trying for.

The Product: Good, but at around the same price as Di Giorno…

[Ed: Their Hawaiian Pizza is by far the best one on the market, and it is always so fresh]

The Name: not in the least Italian, but their pizza offering benefits from the association with a large assortment of high-quality food offerings. Curiously, many of these other than the pizzas are also Italian-inspired, such as their salad dressing. And they have what in my opinion is the best of all the glass-jar spaghetti sauces…though I’m NOT a fan of its twee name, “Sockarooni”.

Product: really good pizza, and a nice break from most of the others if you’re looking for a thin crust. However, that thin crust does make this an extremely expensive choice, based on the price per ounce. 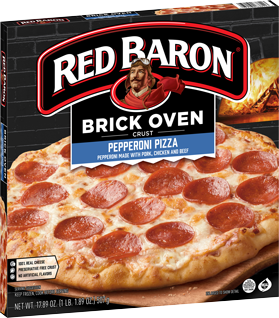 The Name: If Newman’s Own poses the question “What says ‘Italian’ like a blue-eyed Jewish American movie star?”, then the folks at Red Baron answered with “How about a WWI German flying ace?”

The Product: I’ve enjoyed it more than once, despite their weird advertising campaign that over the years has pitched entirely to women. Pace Michael Jordan on sneakers and Republicans, men buy pizza too. (I’ve always thought of pizza as more or less gender neutral, but to the extent it skews at all, would be towards men. Classic cartoon: bewildered guy to visibly exasperated girlfriend: “But football, beer, and pizza are my innermost thoughts and feelings!” Maybe Red Baron just flipped this, and decided women buy pizza too, and were an underappreciated market segment.)

The Name: Like Newman’s Own, this is part of a broader line of foods, in this case vegan. Name seems like a good, easy-to-remember fit for the product line.

The Product: Only one in this list that I have yet to try, but with recent advances in plant-based food technology, actually looking forward to it rather than dreading it.

The Name: Gives you a heads-up that they are going to ruin a basically good pizza by topping it with something that has no business being there.

The Product: This is a perfect example of the Latin proverb “De gustibus non estdisputandum”. Either you like the idea of taking something good (Thai chicken) and dumping it on something better (pizza) for an end result that is far worse than the sum of its parts; or you don’t. In the immortal words of S.J. Perelman: “De gustibusain’t what dey used to be.” Okay, to be fair, they DO have a number of far more traditional toppings, but that doesn’t seem to be how they got their rep.

[ED: Of course this is just a box version of the offerings from the very popular and great higher end sit down chain fondly called CPK out here in California.]

The Name: manages to sound simultaneously unique and generic. Like Newman’s Own, pizza is only one part of a wide range of food offerings.

The Product: I had thought of this as pretty much a head-to-head with Newman’s for the thin-crust market segment, as that’s the only variety that has made it into our local supermarket; however, the web site shows a larger variety of pizzas, as well as other foods. CC comes in a bit less expensive than Newman’s; however, given a choice, I’d push the boat out a bit and pay the small premium to get the latter.

[ED: This might be the house brand.  I see almost same packaging under Signature name at Safeway.] 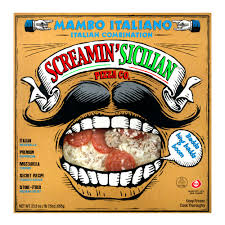 The Name and The Product: The converse of “It ain’t bragging if you can do it” is also true: if you can’t do it, it IS bragging. If you’re going to try to sell pizza with a name like “Screamin’ Sicilian”, you’d better have weapons-grade peppers and sausage that pushes the boundaries of the Geneva Convention, not a product that’s duking it out in the mid-to-low range with Tombstone and Tony’s.

The Name: the ultimate one-trick (or one ad) pony. For our younger readers: the TV spot would show a prisoner heading for a firing squad, or some similar situation where life expectancy is measured in seconds.

Soldier in charge of firing squad: “What do you want on your tombstone?”

The Product: Haven’t seen that ad in, what, decades? But apparently it created brand loyalty, as this now unadvertised pizza is still available, in what I would hesitate to call all its glory. 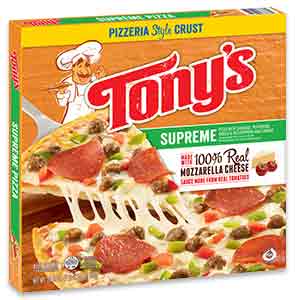 The Name: What, someone had already trademarked Guido’s®? This couldn’t trade in Italian stereotypes more if the package had a cartoon chef, with a toque and black handlebar mustache, twirling a pizza…oh, wait…

The Product: If you have two people who are completely impoverished, this is an alternative to buying multiple Mr. P’s.

The Name: European-sounding woman’s name, evokes both slight exoticism and home-cooking…but sounds more French than Italian to me.

The Product: Competes with Mr. P’s in that it offers only personal-size pizzas; slightly more expensive, slightly better quality than its competitor.

The Name: One presumes (and hopes) that the “P” stands for “pizza”.

The Product: The crust is definitely made of dough, and the sauce is recognizably tomato; I guess it makes sense that they’ve managed to pair mystery cheese with their mystery meat. (Okay, that’s a bit harsh—the French say “Hunger makes the best sauce”, and I’ve purchased Mr. P’s more than once…but when I was really broke.)

Disclaimer: No Pizzas Were Hurt In The Writing Of This Article

…although one was eaten. I brought home a plain cheese pizza from our local take-and-bake establishment, opened up the refrigerator for some stray vegetables that wanted to get in on the act, then chose my canned seafood topping…and, despite childhood nostalgia for sardines, indulged my adult preference for anchovies.