Home › Branding › Why is the Golden Gate Red? And Other Naming Questions.

Why is the Golden Gate Red? And Other Naming Questions. 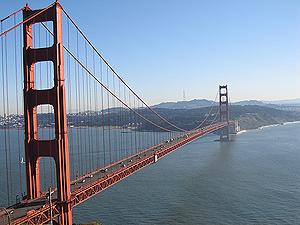 It is that time of year to have some fun with naming. While your creative team conscripts are waiting for their probably futile brainstorming session to start, give them these riddles as a warmup exercise:

There must be lots more of these. Please share them with us all.

PS (*)  The sun sets due west of the Golden Gate Bridge, making for spectacular golden hued views as it reflects off the water, clouds, sky and often the fog too. In fact it was known as the Golden Gate before it had a bridge connecting San Francisco and Marin County. This is the only ocean access point for the giant San Francisco Bay and all the water that feeds in from the Sacramento and other rivers.