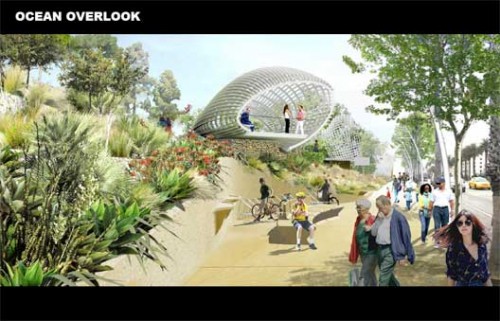 In most of the USA, there are remnants and history from the native indian tribes that first populated the lands. Some have even become famous names like Yosemite and Shenandoah and Mojave. It seems to me though that the big exception to this has been Southern California where Indian names have seldom survived. Could this be because the land was later overrun by Mexico? (I mean before the Grapes of Wrath settlers came from the East, not the present Mexican evolution.)

Or could the problem be that the local tribes mostly came from the Tongva Nation lineage that had names like Sawayagna, Sehatgna, Tibgna, Moniikangna? Names we all struggle with since the constructs are hard to say. See the Tongva Nation Map. The exception to this name style is the old name for San Clemente Island: Kinkipar.  According to my informants, many a Kinky Pair still visit the island:)

Anyway, kudus to the Santa Monica city council for finally confessing they don’t have any better ideas and so named their new fancy park Tongva Park. If that name sounds strange to you now, come back in a few years. Everyone will be treating it as just as common as any other new actor in town name.