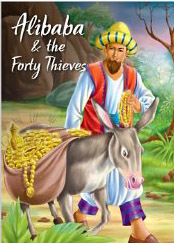 In all the hoopla surrounding Alibaba Group’s IPO, am I the only one stopping to think about what a strange, and brilliant, name choice Alibaba was for the first company, and now the group? No Jack Ma did not pick the name because it was some great Chinese word or symbolism, nor because he wanted to be the leader of a band of 40 thieves. He simply picked it, while on business in San Francisco, because “everyone knows the name, regardless of if they are English, German, Chinese or Indian.”

At the time he was not that confident in his own English, so he asked the waitress in the restaurant if she knew the name Alibaba. Then he asked people in the street and in business. One nice thing about San Francisco is you get a great cross section of the world in the city and up and down Silicon Valley, including a very large Chinese and other Asian population.

Did anyone jump up and down and say that is an Arabic story set in Persia (now Iran) and Baghdad? In the movie Alibaba even waves the Saudi Arabian flag – in other words the wrong flag. What is the connection to China? Well, it is simply a Chinese company that started out to enable small Chinese vendors to trade with the world. A company that took a known name that is appropriate -saving a lot of branding dollars in the process. We all know now that if we want to buy goods from China (and beyond), go to Alibaba.com first. No need to have a cousin who has a friend who once went to Shanghai, or wherever.

In a trademark note, Alibaba Group does not have exclusive rights to the name Alibaba, in large aprt because lots of other people registered it before they came along. But boy are they being aggressive to protect it now. You should see how long some of their descriptive claims are for the name. For example, just for education products and services their application has about 40 full lines of small print. Wow. I never knew there was that many ways/products in education.

All these trademarks are filed on behalf of the Alibaba Group, a Cayman Islands shell company – and the real company you invested in if you had a piece of the IPO action. Think about it, the Cayman Isles are in the Caribbean which has traditionally been another pirate trading stronghold!

A Chinese company with an Arabic/English name and not red corporate colors! I love it. Jack Ma is a great pioneer by not following the party song sheet. Ask yourself why your eCommerce name has to be so descriptive.

PS Unfortunately there are very few names still left that are well known and legally available to kick start your branding. Amazon is one other, but even they have to promote Amazon.com more and more because of push back from other Amazon trademark holders.