I recently returned from a road trip to Texas and came back along Hwy 40 that parallels (or actually is) the old famed Route 66 that so many pioneers took to discover the West. Apart from long, boring freeways in summer heat, I can say that in three days I discovered three things of interest:

Yes, there really is a town/area called Zuzax. Apparently a curio shop keeper once made up the name to attract attention, though he often told visitors it was named after the Zuzax Indian tribe.

I was happy to get lost briefly in a good stop over town called Gallup – where there are more Indian jewelers on the main strip than you can imagine surviving. In fact a complete industry, with designers, silversmiths, wholesalers, retailers and component suppliers. And I thought I saw a lot of turquoise jewelry elsewhere in my travels. Wow. Here the costs are low and obviously the talent exists, though a number were advertising silversmith jobs. Is this where the Gallup Poll gets its name? I rather doubt it. 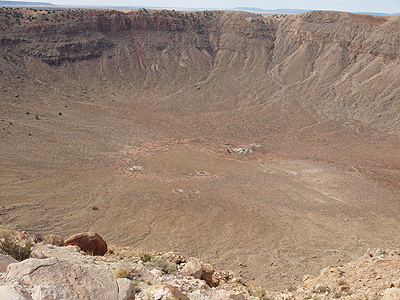 Finally, and of no name interest at all, Meteor Crater really is impressive and a great break from boring freeway travel. Glad I made the impulsive stop for this and many other pictures. To think the real moon landing astronauts actually trained here is mind blowing. Plus they have a great mineral and fossil museum store.