Home › Naming Education › Regional Naming is Steeped in History and Folklore, but makes no sense.

Regional Naming is Steeped in History and Folklore, but makes no sense. 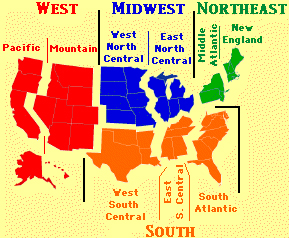 Apparently there is an old story that Japanese pilots failed their training course in the USA because they couldn’t navigate to New England. They protested that it wasn’t a place and wasn’t on the map!

So how come we instinctively know where it is? Furthermore, we know the difference between New England and The North East when talking about US locations. But why do we call it The North East, yet on the other coast a similar area is called The Pacific North West.  Are we trying to distinguish this from some more generic North West. However, if you go further south, the rule flips around: We have the Mid Atlantic States vs The West Coast.

Of course they don’t have to teach this in geography classes anymore, since you can simply look up any place via its real or nickname or slang name on the great Wikipedia. What they do have to teach in English class though, as one colleague so emphatically told me when I first settled in the USA forty years ago:  We say  “Back East” when on the west coast and talking about New York say. However, if we are back east, we say “Out West” when referring to Los Angeles say. Why? Don’t ask me, and don’t blame the British for these idiosyncrasies in English usage.

PS I think history has something to do with fact that the MidWest is only in the center of the country.