Why is Pluto’s moon named Charon? 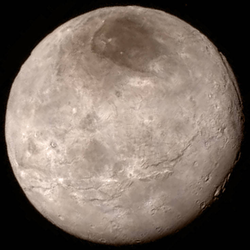 While all the world’s scientist are walking around in amazement about the discovery details of the former planet Pluto, I am thinking, “How did Pluto’s moon get the name Charon and what does it mean?”

Luckily for me, the whole story is fully documented on Wikipedia. After James Christy discovered the moon, he named it after his wife Charlene’s nickname. Despite some other attempts to change it, the name stuck, as has the pronunciation of  Shah Ron. Sure beats the old scientific temporary designation of S/1978 P 1!

The fact that Charon is a Greek mystical figure (ferryman of the dead) just made the name more interesting for the scientific community – after all, they are people too.