This may cause both embarrassment and offense when words, names, actions and abbreviations can be misconstrued, through pronunciation and misinterpretation. And it all depends on your home language.

I recently had a tutorial with an ESL Post-grad student.  He apologized that he needed to break off the call as he needed to do Wudu. 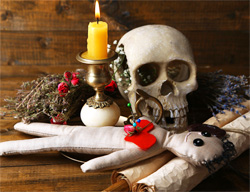 Coming from Africa I thought he said, due to his accent, he needed to do Voodoo.

Between laughter I asked him: “On whom?” He replied seriously, “On myself, of course!”  I continued: “So why are you going to stick pins into yourself?” I asked him to Whats App me the spelling as we were obviously crossing wires here.

When I received it as: WUDU, I still mentally associated it with Microsoft W.U.D.O.

I didn’t at first connect the orthographic difference as the phonological sounds were so similar.

I wonder how many other people mix them up, with no insult intended to our Islamic friends.

It sounds perfectly clear to Microsoft Marketers and Namers – Window Update Delivery Optimisation when said as a phrase. Due to its length, these things get coined and shortened with people only then using the acronym it has evolved into- WUDO. The ‘Do’ Part sounds like (I) ‘do’ or to some languages as a vowel sign of U. Thus, confusing WUDU with WUDO and the W sounded like a muffled ‘V’ to which I had concluded VOODOO with the long ‘O’.

It is therefore so important to ensure cross-lingual enunciations are practiced aloud when choosing the name or taglines or even your marketing phrase.

Aside: They use Wudhu / Wudu / Wudo –I’m not clear whether this is a variance with the Arabic dialects or not.